With the Merlion – a creature with a lion’s head and a fish’s tail – presiding over the city, Singapore has become one of the most prominent metropolises leading the charge in international business and sustainable urban development in the world. Singapore is not only the capital city’s namesake, but also the name of this island. Located off of the Malaysian coast, where it is separated from the mainland by the Strait of Malacca, Singapore is about the size of the metropolitan area of London and has embraced an urban development plan of bringing greeneries to the skies.

Singapore’s history can be traced back as far as the 8th century, where the city was used as a major trading outpost for the Srivijaya Empire of Sumatra. The city was referred to as “Tumasik”, meaning “sea town” in Malay. By the mid- 11th century, Singapore underwent various power transitions with many different empires trying to lay claim to the region due to its strategic trading location. While the origins of the name of Singapore are debated, at some point during this time, the city’s name changed to “Singapura”, or “Lion City”. One of the leading stories is based on the Malay legend of a Sumatran prince – the story recounts a prince who visited the island and mistook a tiger for a lion, creating an epic that would eventually name the merlion as the city’s symbol.

By 1819, Sir Thomas Stamford Raffles of the English East India Company, in search of a new port to develop in the Southeast Asian region, found Singapore as a perfect fit for new trading routes. He attempted to come to an agreement with native leadership, however at this time, the Dutch had territorial claims to the island. It wasn’t until 1824 that Singapore was ceded to British control with the signing of the Anglo-Dutch Treaty, where the British gained control of Malaya and Singapore with the hopes that the region would become a primary trading port for the British. Singapore would then become a crown colony in 1867, linking British and Western markets.

In the early 20th century, Singapore became not only a stronghold in the ways of international trade, but also in military strategy as well. In the aftermath of World War I, British forces decided to establish the city of Singapore as a naval base. The island would eventually become a battleground during World War II and would even be surrendered by the British to Japanese forces until the end of the war in 1945. In 1959, Britain would grant self-government to the country of Singapore; however, it would remain a British crown colony. Singapore’s independence from Britain was largely due to the rise of the People’s Action Party (PAP), which embraced the goal of independence and would spearhead the movement to have Singapore join the Federation of Malaysia in 1963, effectively ending British rule. The Federation was intended to unite the region (largely due to rising ethnic tensions in the area), however not even two years after joining the Federation, the island of Singapore would be asked to secede due to pro-communist forces in the PAP-led government. Modern-day Singapore’s government relations continue to emulate strong trade priorities, with Singapore as a founding member of ASEAN and named the best city for doing business by the World Bank in 2012. 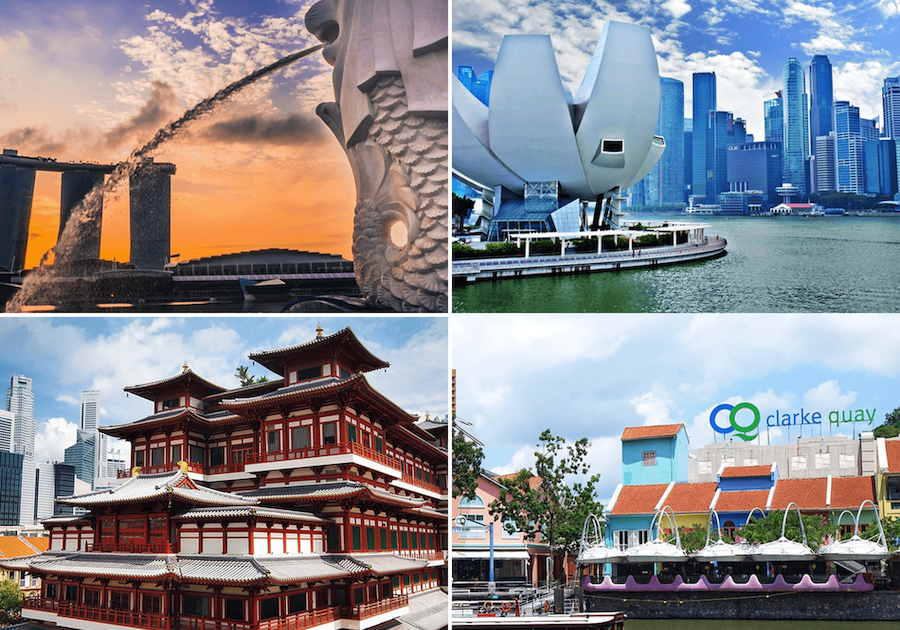 Singapore has become an absolute must for foodies around the world. Throughout the city, open-air food markets called hawker centres include a wide variety of stalls and food options and are the go-to place for anyone looking for affordable cuisine at any time of day. Some of the most popular centres are found at Maxwell Road Hawker Centre, Old Airport Road Centre, and Chinatown Complex Food Centre.

Overall, dishes tend to reflect a mélange of culinary inspiration from neighboring countries and cultures, but most dishes include a few key ingredients: noodles; rice; and seafood. Noodles are often served in soups or over rice and generally include regional spices for a strong flavor profile. Lovers of seafood will find some of the freshest seafood in the world and find that much of the dishes found in Singapore serve their seafood whole – whole fish head curries and full prawns will become your every-day snack during your trip. Rice meals tend to be reminiscent of Indian cuisines, resembling curries of the region.

The most popular savory dishes tend to incorporate more than one of these key ingredients. From the rich minced meat noodles of bok chor mee to the rice vermicelli seafood soup, laksa, to the national dish of chili crab, you are sure to find your new favorite dish at your local hawker centre. For dessert, popular dishes include kueh ubi kayu – a steamed tapioca cake – and kaya toast served with coconut jam. Tropical fruits also often make appearances in Singaporean dessert platters, most notably the infamously pungent durian fruit often being blended into juices and shaved ice. Fun fact: while beloved by many, Singapore actually had to ban durians on all forms of public transportation because of how strong its smell is! 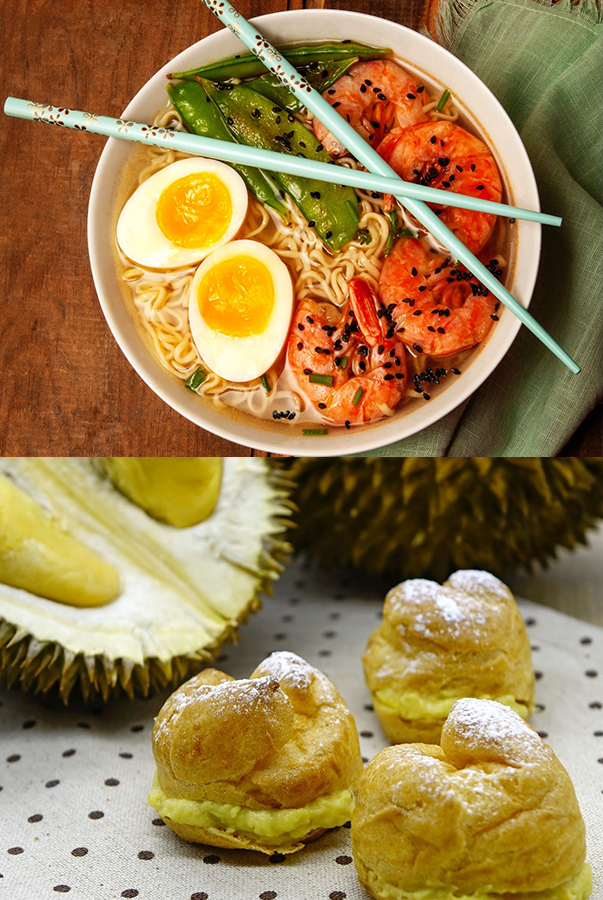 While a small island nation, the capital city of Singapore is a vibrant epicenter of cultural, ethnic, and linguistic diversity that reflects its long history of internationalism. The capital is a hub for business leaders, making Singapore one of the wealthiest nations in Asia. The city’s demographic composition primarily includes folks of Chinese, Malay, and Indian descent. However, there is also a growing Western influence within the city due to its rise in the international business sector so there is a growing ex-pat population as well. Walking through the streets of Singapore, you may hear a variety of languages being spoken, with four languages – Mandarin Chinese, Malay, English, and Tamil – being recognized as the country’s official languages.

Singapore’s trade scene is not the only thing that it has to offer – it has also become a popular tourist destination in recent decades with activities and sites that will interest all types of travelers. We may not think of an airport as a tourist attraction, but Singapore’s Jewel Changi Airport welcomes travelers in style! In addition to being an airport, Jewel Changi also houses a large, nature-themed retail center with gardens and waterfalls throughout – it is even home to the tallest indoor waterfall called the Rain Vortex! After a visit to the airport, the city has even more to offer, with festivals, shows, and sporting events such as Formula 1 racing being hosted in the city all year long. To end your trip, if you aren’t afraid of heights, Marina Bay Sands casino resort and Skypark features rooftop gardens, trails, and an infinity-edge pool – the Skypark is modeled in the shape of a boat resting atop three hotel towers below and gives an incredible view of the bay!

Nicknamed “The Garden City”, Singapore is also on a mission to become the greenest city in the world and has been identified by local and international conservation groups as a model for sustainable urban development. Led in large part by Cheong Koon Hean, the head of the urban development agency, Singapore is working to redefine its skyline by implementing green initiatives that work to preserve greenery in the city. All new construction projects must implement a green replacement strategy, meaning that much of the city’s skyline is covered with countless beautiful vertical gardens and parks. In fact, nearly 50% of the city’s land area is covered with greenery. These sustainable strategies are also used as a form of flood control for the island. As a result, many of the most popular tourist destinations in the city of Singapore are urban parks – must-sees for new visitors are East Coast park featuring sandy beaches, Bishan park for sprawling hills, and Gardens by the Bay with their Supertree vertical biomes and solar-powered evening light show! 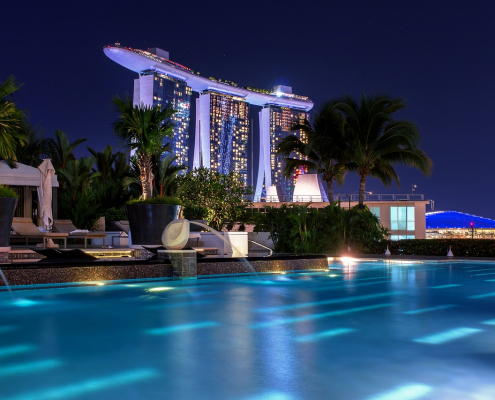 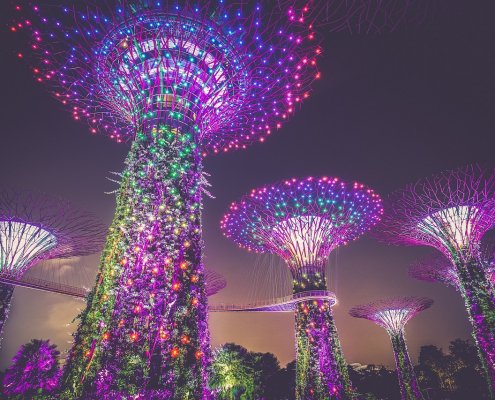 If you would like to learn more about this incredible city, its history, and cuisine, check out these sites:

Supporting Next Generation of Leaders